Welcome to the first issue of the MakEY newsletter, which outlines the main activities of the project to date. We would love to hear your thoughts on our e-newsletter, so please send us your views, comments or suggestions by email: makey@sheffield.ac.uk

Welcome to the first issue of the newsletter of ‘Makerspaces in the early years: Enhancing digital literacy and creativity’ (MakEY), a 30 month project funded by the EU H2020 Research and Innovation Staff Exchange (RISE) programme.

The project involves research being undertaken in 7 EU countries – Denmark, Finland, Germany, Iceland, Norway, Romania and the UK – and the US. In addition, we are working in collaboration with researchers in Australia, Colombia, South Africa and the USA to create a global network of scholars interested in this area. The project aims to develop a network of researchers, creative industry professionals, makerspace staff, early years practitioners, museum educators, librarians, and wider educators who can collaborate to develop educational materials and tools to foster children’s digital literacy and design skills. It further aims to offer recommendations for research, policy and practice (in industry and education) about the way in which makerspaces for 3-8 year-olds can be developed in both non-formal and formal learning spaces in order to foster young children’s digital literacy and creative design skills. 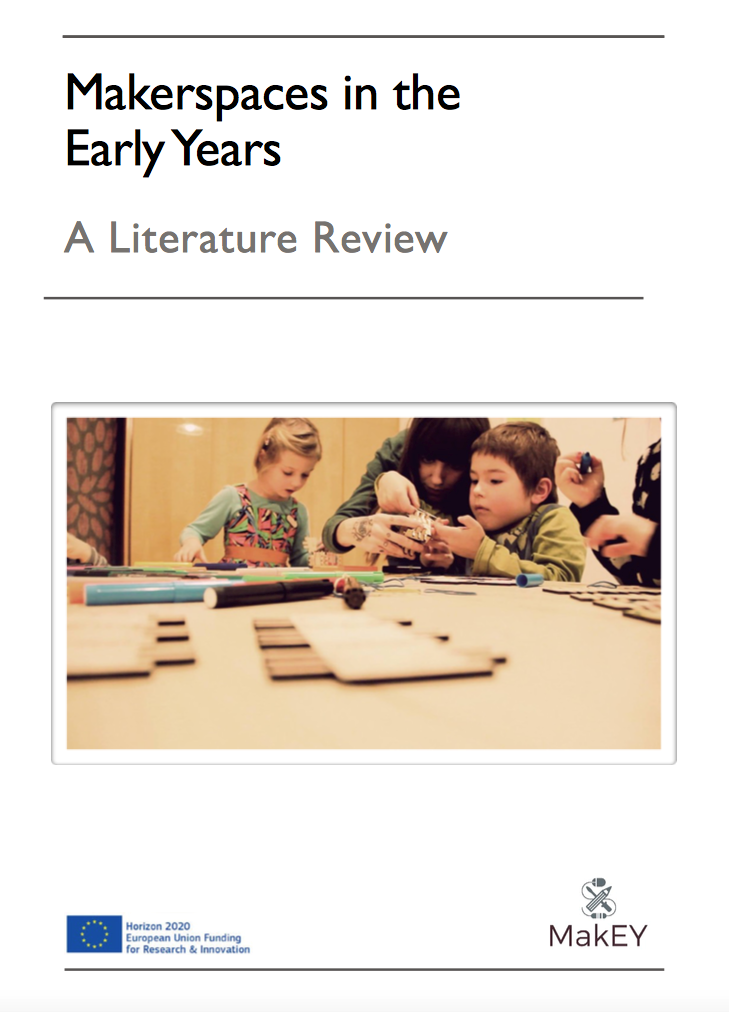 The review outlines the history of the maker movement, synthesises findings from studies that have examined the impact of maker activities in formal and informal settings, and explores the synergies between makerspaces and early years settings.

The review is available at the following link:

The project is progressing well across all of the countries involved. Here is a brief update of the projects.

Klaus Thestrup (Aarhus University) and Kjetil Sandvik (University of Copenhagen) have worked with partners at DOKK1, Katrinebjergskolen and Moesgaard Museum and discussions have related to the core research question of the Danish project: how to challenge and create new makerspace formats. The team has conducted one workshop on how to make a space into a makerspace which consisted of building with LEGO for three days in the new creative space ‘Boksen’ at Katrinebjerskolen. Six-year old children were involved in the project, and data were collected in the shape of visual documentation (photos and videos) and comments from the participating teachers, pedagogues and visiting researchers.

The Finnish team hosted the first network meeting in Helsinki in April 2017. Two days of intensive collaboration by the whole MakEY project team concluded with an open workshop in which participants learned about the project and engaged in some hands-on making. The meeting was very fruitful, and enabled the MakEY team to develop ways of working that will inform the ongoing project. The team is now preparing to undertake observations of makerspaces in early years settings in Helsinki.

The German team has already run one makerspace event with children. The aim of the project is to enable children to design digital 3D models of real objects, that would be then be transferred from the physical world into a virtual reality environment, enabling children to play with it virtually. In the makerspace event, the first part of the workshop consisted of physical, ‘real life’ play, in which participants were given a task of creating a world around a Vai Kai doll, using paper, cartons, scissors, colour pencils and glue. The second part of the event was about recreating this world in virtual reality using relevant equipment and ‘Tilt brush’ software. The work is progressing well and enabling the team to develop an understanding of the key affordances and challenges of virtual reality technologies.

The Icelandic team are currently preparing for six different case studies to be undertaken. These will involve makerspace workshops being undertaken in schools, libraries and museums.

The Norwegian team is going to undertake observations of young children using beebots in makerspace workshops at the Norwegian Science Museum. They will then observe the same group of children in a play-based maker activity in their kindergarten. In addition, they will observe children and their parents participating in the Museum’s makerspace during weekends.

The Romanian project consists in familiarising young children with science topics through a longitudinal engagement in activities specific to a makerspace, in a school setting. A series of12 workshop sessions will be offered in three schools (from different socioeconomic backgrounds), each of them to a group of 10 children (6-7 years old).

This project will investigate the benefits and challenges of including young children, along with their parents and caretakers, in activities in Makerspaces based in museums and non-formal learning centers. Working with several museum-based makerspaces in the San Francisco Bay Area, the team is observing current provision aimed at young children, capitalising on the uniquely diverse array of making opportunities for young children in the region (a center of technological innovation due to its proximity to California’s Silicon Valley).

The team is also conducting a landscaping activity in order to map the current range of provision in museums and non-formal learning spaces across the Bay Area, identifying some of the barriers to expanding digital making opportunities for young children and collating good practice on how these might be overcome. The research is building on the team’s current project, Parenting for a Digital Future, by recognising and focusing on the role of parents in modelling or engaging with making activities to support emerging forms of individual or jointly negotiated digital literacy.

The Sheffield project consists of four case studies, undertaken in two nurseries and two schools. The case studies all involve pop-up makerspaces being offered for children in which they can engage in a range of making activities. In three of the settings, the making will focus on creative use of materials such as conductive Play Doh, LED circuits and conductive paint, whilst in the fourth school, children will create representations of their local environment in virtual reality landscapes, using software such as TilT Brush.

A public engagement event has taken place in Sheffield UK  on 11th November 2017 as part of the ESRC Festival of Social Sciences. Held at the Central Children’s Library in Sheffield, the event has engaged young children in a series of maker activities, including the creation of light shows, and the use of a 3D printer. The event was very well attended and has provided a means of disseminating information about the project to the public.

The project has a blog, which contains articles written by various members of the team. It can be found at:

We also have a Twitter feed, which can be accessed here:

Copyright © 2016 MakEY, All rights reserved.
Our mailing address is:
makey@sheffield.ac.uk